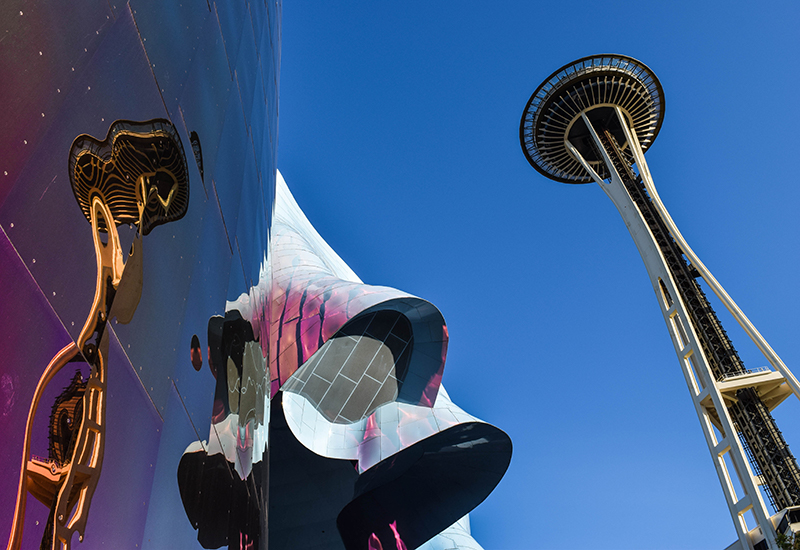 On today’s podcast, we talk about the Museum of Pop Culture or MoPOP is located on the campus of Seattle Center, adjacent to the Space Needle and the Seattle Center Monorail, which runs through the building. Museum of Pop Culture or MoPOP is a nonprofit museum in Seattle, Washington, dedicated to contemporary popular culture. It was founded by Microsoft co-founder Paul Allen in 2000 as the Experience Music Project. Since then, MoPOP has organized dozens of exhibits, 17 of which have toured across the U.S. and internationally.

[#Podcast] @micheleforto talks about the Museum of Pop Culture in Seattle, WA. #mopop

The museum—formerly known as Experience Music Project and Science Fiction Museum and Hall of Fame (EMP|SFM) and later EMP Museum until November 2016—has initiated many public programs including “Sound Off!”, an annual 21-and-under battle-of-the-bands that supports the all-ages scene; and “Pop Conference”, an annual gathering of academics, critics, musicians, and music buffs.

MoPOP, in collaboration with the Seattle International Film Festival (SIFF), presents the Science Fiction and Fantasy Short Film Festival which takes place every winter. Since 2007, the MoPop celebrates recording artists with the Founders Award for their noteworthy contributions.

Hello and welcome to the Rock n Coasters Podcast. I’m Michele Forto for First Paw Media. Today we are discussing the Museum of Pop Culture in Seattle, Washington. This is one of our favorite museums and you will soon learn why it fits nicely on this podcast.

My husband, Robert and I visited this place back in 2012 and were immediately mesmerized with all the cool exhibits. Even though this is more than a decade later, it does not disappoint.

The first thing you will notice is the building’s unique architecture, which glimmers in the Seattle sun, well, at least when it is not raining, and the infamous space needle’s reflection gimmers on the building’s west side. As you enter and walk up the stairs you will see the massive guitar sculpture, one of the most impressive works of art I have ever seen.

Let’s talk a bit about each one. 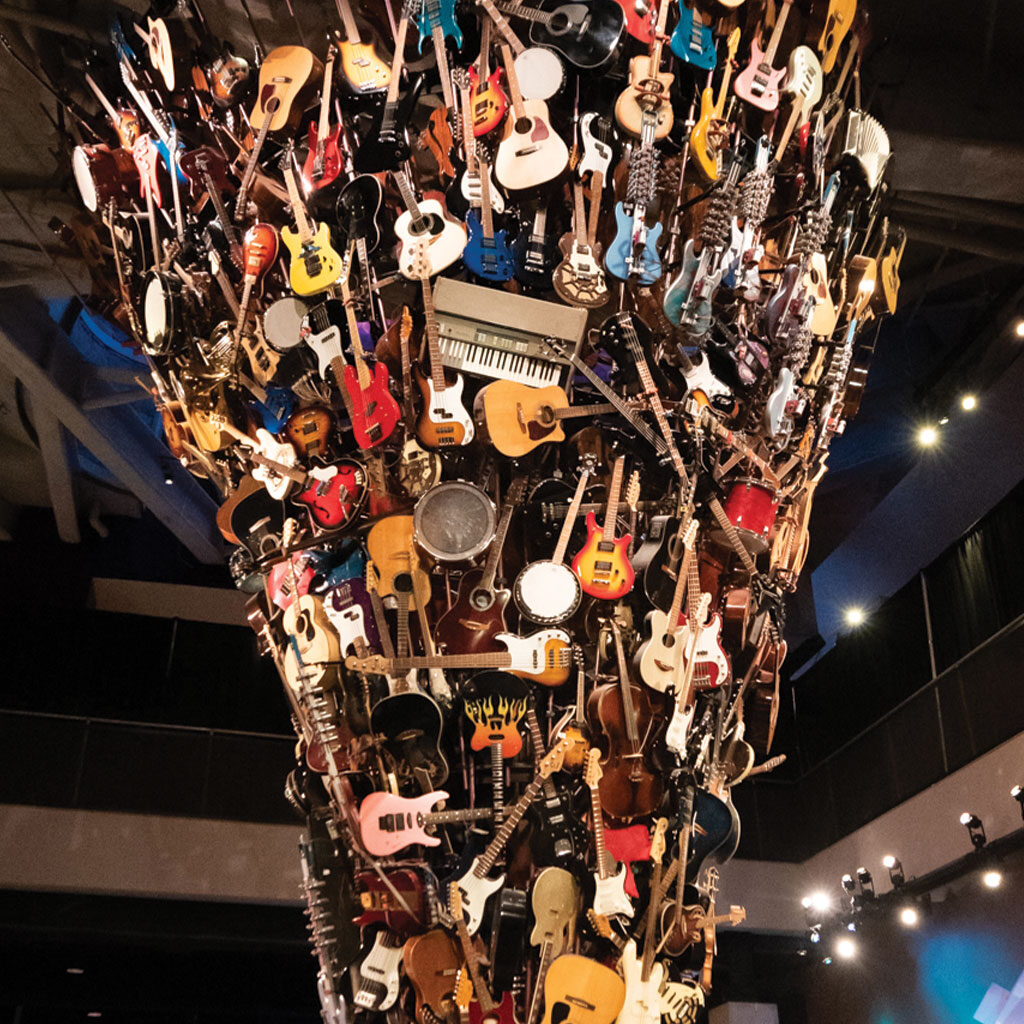 Billed as a single image can define a moment, creating an instant icon.

They say a picture’s worth 1,000 words, especially in one of music’s most language-conscious genres: hip-hop. Contact High explores four decades of photography, from the late 1970s to today, documenting a revolution not just in music, but in politics, race relations, fashion, and culture. Through more than 170 iconic images of hip-hop’s most influential artists (Missy Elliott, Jay-Z, Queen Latifah, Tupac, and more) — including contact sheets that give us a rare glimpse into the creative process of a photo session — Contact High examines the evolution of hip-hop, connecting us with the experiences, identities, and places that have shaped the world’s most popular music genre.

Nirvana: Taking Punk to the Masses

The world’s most extensive exhibition of memorabilia celebrating the music and history of Seattle’s rock luminaries, Nirvana. This was my favorite exhibit in the museum.

You will get an intimate look at the history of Seattle luminaries, Nirvana, with more than 200 rare artifacts, photographs, and oral histories.

The exhibition features instruments like Kurt Cobain’s Fender Stratocaster, Krist Novoselić’s Hiwatt DR103 bass amplifier head, and Dave Grohl’s Tama Rockstar-Pro drum kit. In addition, a diverse set of objects like the Cobain-created Fecal Matter shirt and the casting call flier for the “Smells Like Teen Spirit” music video will be on display.

Visitors eager to dig even further can view video kiosks with even more information. Steve Fisk’s ambient soundtrack can be heard as fans move through the exhibition. 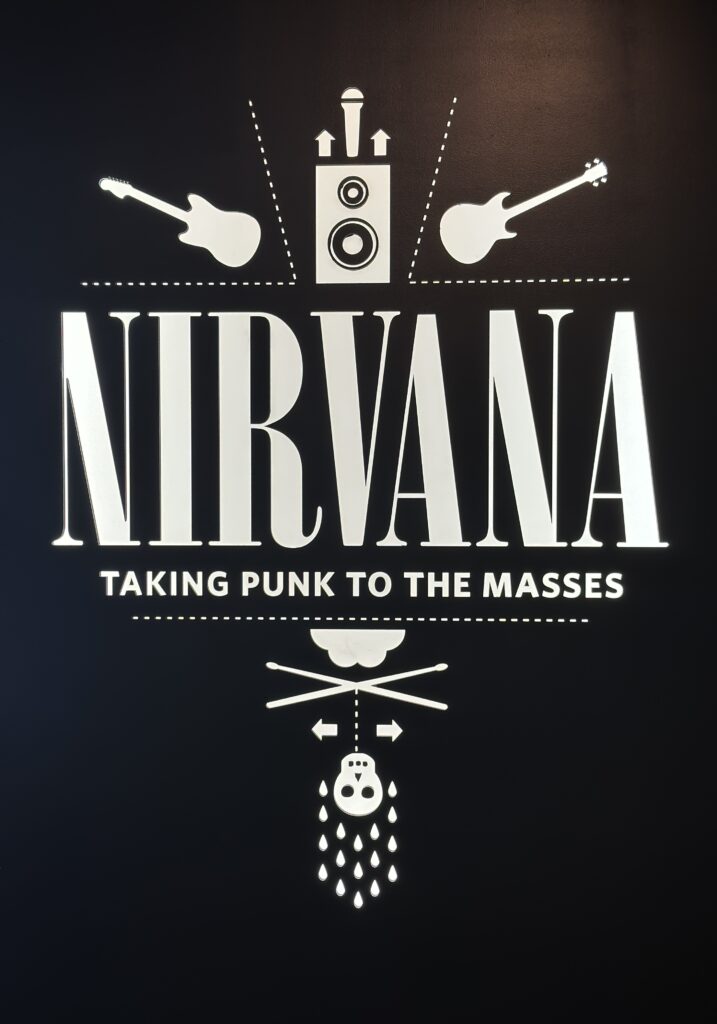 In this exhibit, visitors can take an intergalactic journey to explore a showcase of iconic sci-fi artifacts. You will see a Terminator, a vast collection of blasters and weapons, and cool Star Wars, including one of my favorites, Greedo from Episode IV.

Packed with more than 150 artifacts from iconic films and television shows, Infinite Worlds of Science Fiction invites you to experience the incredible range of storytelling found in science fiction: from Star Trek to H.G. Wells’ The War of the Worlds, from big-budget Men in Black to the Philip K. Dick-inspired Blade Runner to the Battlestar Galactica series.

Within a dynamic and immersive space, this interactive spacecraft will encourage visitors to embark on their own space adventure, discover new alien civilizations, scout for new worlds to explore from the ship’s cockpit, and investigate numerous alternate universes. What secrets will you unearth?

Sacred to Death: The Thrill of Horror Film

Explore the most terrifying monsters in horror cinema. By far a very cool exhibit. If you follow Robert and I on social media, you know that we are huge horror fans, and this place was right up our alley.

Scared to Death: The Thrill of Horror Film features more than 50 props and costumes from film and television including A Nightmare on Elm Street, Friday the 13th, The Walking Dead, Buffy the Vampire Slayer, Candyman 2: Farewell to the Flesh, The Thing, Us, Vampire Hunter D, and The Addams Family.

If you look around you will see Sam from Trick ‘r Treat, the ax from The Shining and a life-size Michael Myers from the Rob Zombie movies.

Here you will travel alongside the legendary Jimi Hendrix at the height of his fame. In my opinion, this was the weakest collection at the museum but still cool nonetheless.

From his arrival in London to his untimely death on September 18, 1970, Jimi Hendrix was rarely in one place for more than a month. Wild Blue Angel: Hendrix Abroad, 1966-1970 offers a contemplative look at the period of Hendrix’s life spent on the road as he catapulted to fame.

Discover the shy genius of Hendrix through an immersive gallery soundtrack featuring rare Hendrix interview clips; Hendrix’s only passport, issued on the day he left for London on September 23, 1966; his diary, where he recounts friends, shows, and experiences from the road; an Electric Lady mixing console from the personal recording studio he used during the last weeks of his life; and other original artifacts, artwork, and photographs.

Fantasy: Worlds of Myth and Magic

I loved this place, but it was not one of Robert’s favorites. The place truly tries to make the world of make-believe believable and reminds me of the Harry Potter world at Universal Orlando.

From The Wizard of Oz and The Princess Bride to Harry Potter, Fantasy: Worlds of Myth and Magic invites audiences on a fantastical journey to unearth the inspiration behind this genre’s most magnificent creations.

Pet a dragon designed by Seattle Opera and explore hands-on installations that include world-building and mapmaking. See the Cowardly Lion’s costume from The Wizard of Oz, weaponry from The Lord of the Rings, the first white walker head from Game of Thrones, and other iconic costumes and props from TV and the silver screen.

If I remember correctly, this was here the last time we visited.

Here you can TRACE THE JOURNEY OF THE GUITAR IN AMERICAN POPULAR MUSIC THROUGH THE EXPLORATION OF ICONIC INSTRUMENTS AND THE MUSICIANS THAT PLAYED THEM.

The exhibition features nearly 20 guitars from music legends like Howlin’ Wolf’s 1965 Epiphone Casino, Nancy Wilson’s 1965 Fender Stratocaster, Brandi Carlile’s Taylor GC8, and Jerry Cantrell’s 1984 G&L Rampage—this happens to be the guitar that he used on almost all of Seattle’s own, Alice in Chain’s most iconic songs and his known as Blue Dress for its now-long faded graphic on the guitar’s body. The gallery also presents a timeline of significant milestones highlighting the instrument’s development from the Fender Telecaster, the Gibson SG and beyond. 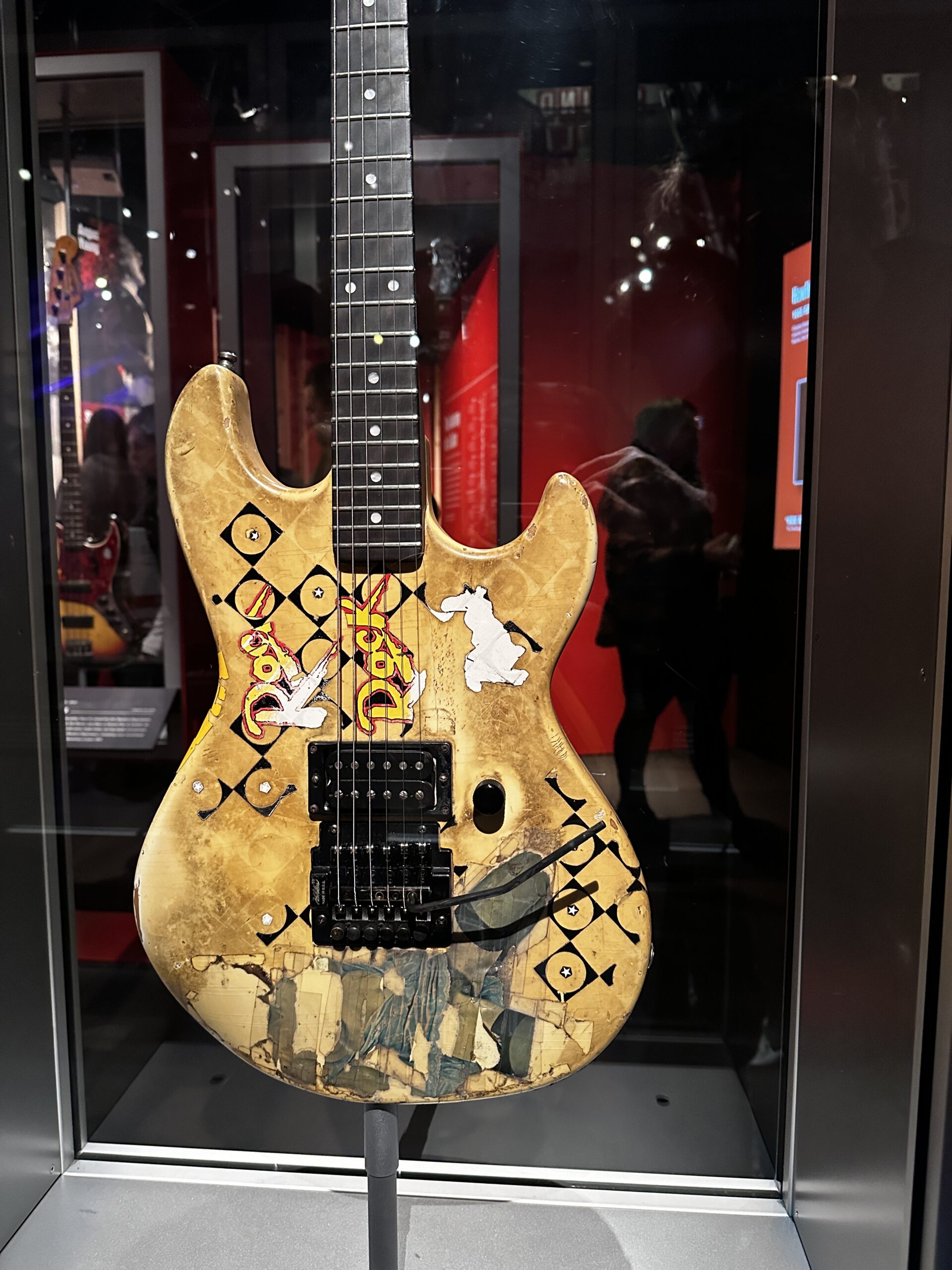 This is an incredible place that allows you to invite your inner musician to come out and play. Robert tried his hand at the keyboard and drums and now I know why he wants a drum set. It will be fun watching him learn a new instrument.

Guests can deepen their understanding of how the electric guitar works through a detailed infographic focused on hardware like pickups, frets, the headstock, and pickguard.

The gallery also features video that gives visitors a chance to hear the instruments in action through clips of nearly 30 musicians featured in the exhibition including Poison Ivy, Slash, Stevie Ray Vaughan, and Bob Dylan.

This exhibit takes up most of the top floor of MoPop and depending on when you visit it may not be here any longer as it is scheduled to be on display until January 2023.

An Academy-Award-winning costume designer, Ruth E. Carter’s career has defined generations through her work in film and TV. Her art adds dimensionality, flair, and culture to the characters she envisions, giving power to the incredible actors that wear them. Her vibrancy and attention to detail in costuming is integral to translating stories of race, politics, and culture to the big screen. From humble roots in Massachusetts, Ruth Carter has been helping style the Afrofuturism movement for almost 40 years.

MoPOP is proud to display more than 60 of Carter’s original garments while also showcasing her immersive process, historical research, and attention to detail that imbues every project she brings to life.

Pearl Jam: Home and Away

Get a first-hand look at Pearl Jam’s journey from 1990 to the present and into the future through more than 200 artifacts directly from Pearl Jam band members and their Seattle warehouse, including instruments, stage props, original art, and a photo op featuring the towering letters from the front of Pearl Jam’s debut album, Ten. 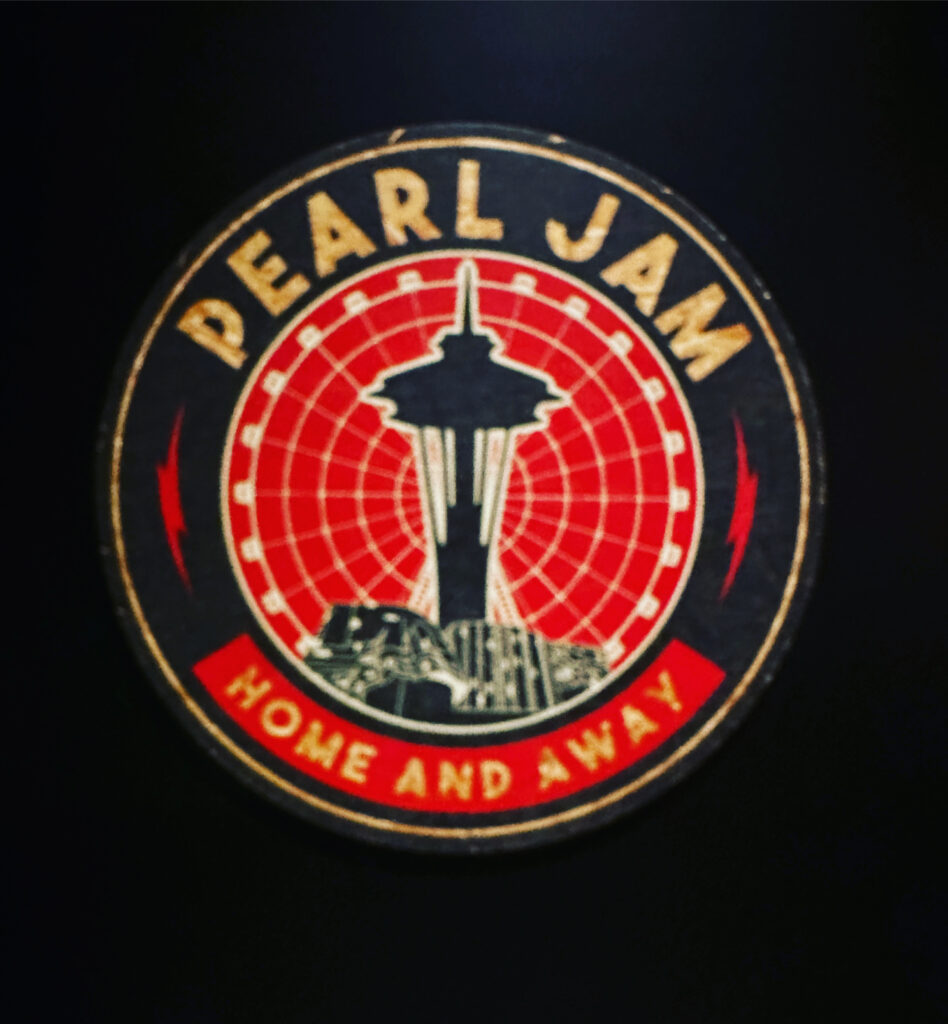 On the way out you must check out the store. They have so much cool stuff from rock n roll inspired cookbooks, a lot of vinyl records, t-shirts, Funko Pops and much more. All told we spent more than three hours here as we waited for the Kraken game to start at Climate Pledge.

Have you ever been to MoPop? What did you think? What exhibits were there when you visited? Let us know in the comments or on our socials just search Rock n Coasters podcast.

Oh, and one last thing, did you know the single best thing you can do for our show is to tell your family and friends how to listen? Who knows, they might just become a rabid listener just like you. 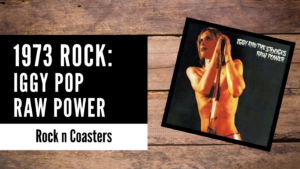 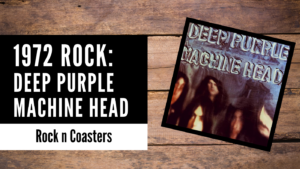